In this initial installment, we have only this photograph to serve as empirical evidence. And, as is often the case, Carl and Bob have varying views of what took place. 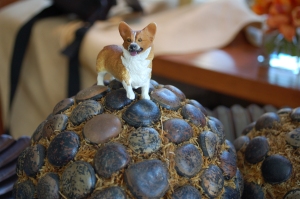 Bob’s version: “My wife and I and Carl strolled the streets of Seaside, Oregon. Because of a car show, crowds choked the sidewalks. Somehow in the maze of bodies, we became separated from our Corgi.

A thorough search ensued. Finally, I heard his bark and found him in a home decorating store where he was nipping at a roundish object. I think he believed it was a spherical doggy biscuit.

Carl’s version: Alongside my owners, I trotted faithfully down the streets of Seaside. Then I heard it—a cry of distress! I dashed and darted through a forest of feet and legion of legs. In a corner store, I spotted the creature. It’s intended victims? An entire dog family!

The creature was a combination monster. It seemed to be made of massive amounts of buffalo dung with tiny turtles embedded onto the surface.

I threw caution to the wind and bounded toward the beast. The collision set me back, but the brute took the worst part. It rolled backward, obviously dazed and dizzy. The advantage was mine and I pressed my attack. Moments of courage interspersed with bolts of bravery, sealed the deal. I defeated the horrible, “Monster of Seaside.”

You the reader, will have to determine which scenario is the most likely.

This entry was posted in Uncategorized and tagged Carl, Corgi, dog, dog humor. Bookmark the permalink.